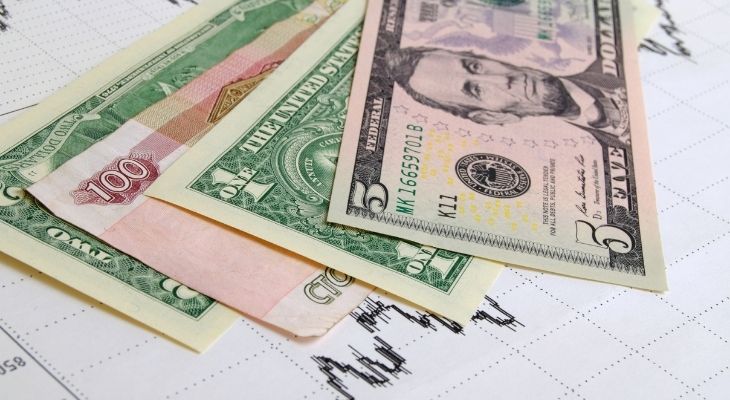 What happened to the exchange rate of Rubles to USD in 2022?

The ruble reached 62.60/USD and 64.95/EUR on May 14, continuing a strengthening trend since early March. For the US dollar, these are the lowest levels since early 2020, while for the euro they have been since mid-2017. But then the dynamic reversed (momentarily 64.50/USD), bringing to mind last week’s trends – a sharp move from 65 to 70+/USD.

What is the reason for such a strong Ruble exchange rate?

As is noted in March commentary on the balance of payments forecasts, the main reason for the ruble’s rise remains the high current account surplus with continued financial account constraints.

Russia’s exports remain high – possible declines in physical shipments of major commodities are offset by rising prices, while imports have fallen sharply and will recover gradually as logistics are rebuilt and the lows in domestic demand determine the demand for imports.

Currency control measures by the Russian Central Bank/government remain virtually unchanged. In fact, the introduced easing for non-resource exports on the timing of the sale of foreign currency earnings does not change the situation. Russian exporters still have to sell proceeds from the transit accounts which the currency cannot be used for other purposes.

Servicing foreign sovereign / private debt in foreign currency and flows to friendly countries are insufficient to offset the overhang from the trade surplus. And if debt repayment problems in foreign currency persist, this could further reduce demand for currency.

What is expected for the Ruble exchange rate next?

Recall that the initial estimates of possible targets for the ruble exchange rate, can balance the current account surplus in the absence of financial account flows – 45-55/USD, and they do not take into account logistical factors (i.e. the presence of money and desire to buy imported goods, but lack of opportunities to do so). These levels can be seen as a best-case for the Russian ruble.

However, individual transactions on the financial account form the demand for currency. Risks of reduced physical supply for certain export components remain, despite the partial offsetting effects of rising prices. There are even more questions about the 2023-2024 outlook for the balance of payments. Obviously, import recovery will start sooner or later.

With more certainty on external conditions, it will be easier for the Central Bank / Government to plan for the easing of currency restrictions. The Currency Regulation Commission that was recently created will probably work out solutions to these issues as well. While we do not think that there will be any abrupt decisions, maybe a gradual decrease in the standard for the sale of proceeds (from 80%) and easing for the population. But the Central Bank said that in 2021 that Russian exporters had been already selling 77% of their proceeds. In the first case, reducing the standard is unlikely to significantly weaken the ruble. Easing restrictions for the population may create some demand for foreign currency, but the question is how high these volumes will be in the context of falling incomes of the population and large losses in the stock market since the beginning of the crisis and the loss of income from foreign assets. Decisions on the assets of non-residents in Russia will apparently be taken in connection with the decisions taken by the West on the frozen reserves of the Central Bank and other assets. In other words, they will not be prompt.

Therefore, there are some arguments against the need for any sharp artificial weakening of Ruble. A strong ruble will help reduce inflation, the Central Bank rate and inflation expectations. Due to the sanctions/rejection of Russian products, a weak ruble will do little to help non-commodity exporters. Budget revenues under the current ruble will be lower than they could be, but there are no serious risks to the budget in 2022, and all treasury needs will be covered by account balances and the SWF.

Hence the levels of 55-60/USD look achievable in the short term (despite the current correction, possibly before the weekend). But in the medium term (2H22-2023), they are unlikely to stay for long. For now, we are targeting the 70-85/USD range for the second half of 2022. There are a lot of inputs remaining (including possible sanctions on commodity exports), which could give a very wide range of estimates.

What does this mean for Ruble investors?

The high volatility of Ruble allows active speculation for additional income, but it also carries a risk of loss for non-specialists.

Inflationary OFZs in this scenario do not look like the best asset among available bonds, but together with floaters in a certain amount may be in the portfolio due to high uncertainty (for diversification in case of risk scenarios)

The strong ruble / slower inflation scenario could stabilize domestic market-oriented companies more quickly. This would set the stage for their stocks to stabilize and start recovering. For now, the stock market, dominated by exporters like Lukoil (feeling worse when the ruble is strong), is pressured by uncertainty related to the timing of the QEO and new sanctions.